WHAT IS ACHALASIA CARDIA?

Achalasia cardia is a motility disorder of the esophagus causing incomplete relaxation of the lower esophageal sphincter with increase in tone and absence of esophageal peristalsis. 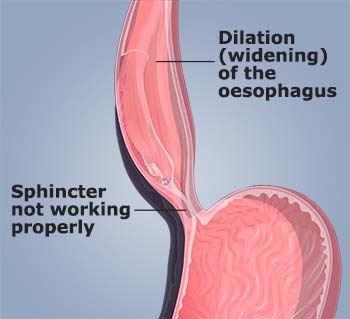 The common presentation of achalasia cardia is difficulty in swallowing. Cases although are mild and rarely fatal; can lead to complications if left untreated.

WHAT HAPPENS IN ACHALASIA CARDIA? 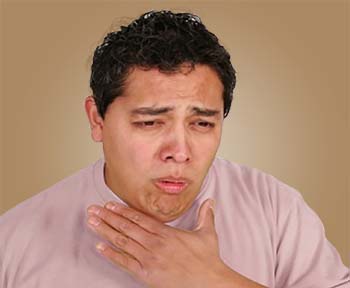 More common in adults than children.
Most common between 25 – 60 years of age.
Dysphagia- difficulty in swallowing
Inability to swallow solids and liquids
Odynophagia- Pain while swallowing
Sensation of choking or something stuck in throat while eating
Heart burn with heaviness in chest
Hiccups and occasional burping
Weight Loss
Sudden difficulty in breathing, choking due to aspiration.
To know more click on symptoms of Achalasis Cardia

WHAT CAN ACHALASIA CARDIA LEAD TO?
Achalasia cardia can present in a mild manner and is rarely life threatening. However if left untreated, can have following complications:

Aspiration Pneumonia- This is a sudden complication arising due to aspiration of gastric contents into the lungs causing breathing difficulties due to bronchopneumonia.
Esophagitis- Recurrent collection of food contents can lead to irritation of lining causing inflammation of esophagus.
GERD (Gastro Esophageal Reflux Disease)- Regurgitation of gastric contents into the oral cavity due to Lower Esophageal Sphincter abnormality can cause GERD.
Esophageal Perforation- Chronic inflammation and irritation can lead to ulceration and cause perforation of esophagus which is a medical emergency.
Cancer of Esophagus- Adenocarcinoma of esophagus has been noted in patients treated for achalasia cardia in past.
Malnutrition- Long term dysphagia can lead to weight loss affecting the nutritional status.

Homoeopathy is a holistic system of alternative medicine which works at all levels of mind and body.
Achalasia cardia is primarily a motility disorder of esophagus due to failure of relaxation of muscles and poor muscle tone.
Homoeopathic medicines act on the smooth muscles of the esophagus and help in strengthening and improving the overall tone of the esophageal sphincter in treatment for Achalasia Cardia.
Complaints of swallowing difficulties, vomiting and heart burn with esophageal spasms are excellently handled with homeopathic treatment for Achalasia Cardia.
Medicines in homoeopathy work at a much deeper level and improve the overall health of the patient and prevent unnecessary complications and relapses.

Few of our amazing homoeopathic remedies include:

Arsenic Album: It is an excellent remedy in homeopathic treatment for Achalasia Cardia with symptoms like dyspepsia, heartburn, and dysphagia. Everything patient swallows seems to have lodged in the esophagus.

Baptisia: This is a wonderful remedy in homeopathic treatment of Achalasia Cardia with dyspepsia and dysphagia accompanied muscular soreness. Patient can only swallow liquids and often vomits due to spasm of esophagus.

Ignatia: Patient feels a lump like sensation in the throat that cannot be swallowed. Difficulty in swallowing with tendency to choke. Patient feels better when swallowing solids and finds liquids harder to swallow. It is a leading remedy in homeopathic treatment for Achalasia Cardia.

Asafoetida: Indicated remedy for spasmodic contraction of esophagus and stomach with reversed peristalsis in homeopathic treatment for Achalasia Cardia. Globus hystericus – sensation of a ball rising in throat with a feeling as if esophagus were driven from stomach to throat.